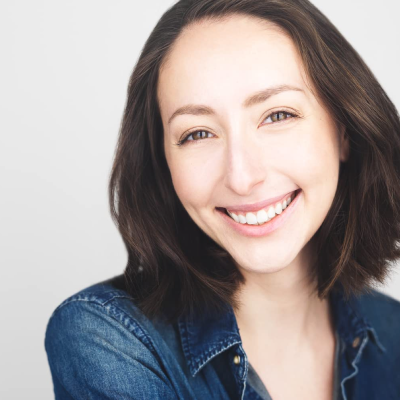 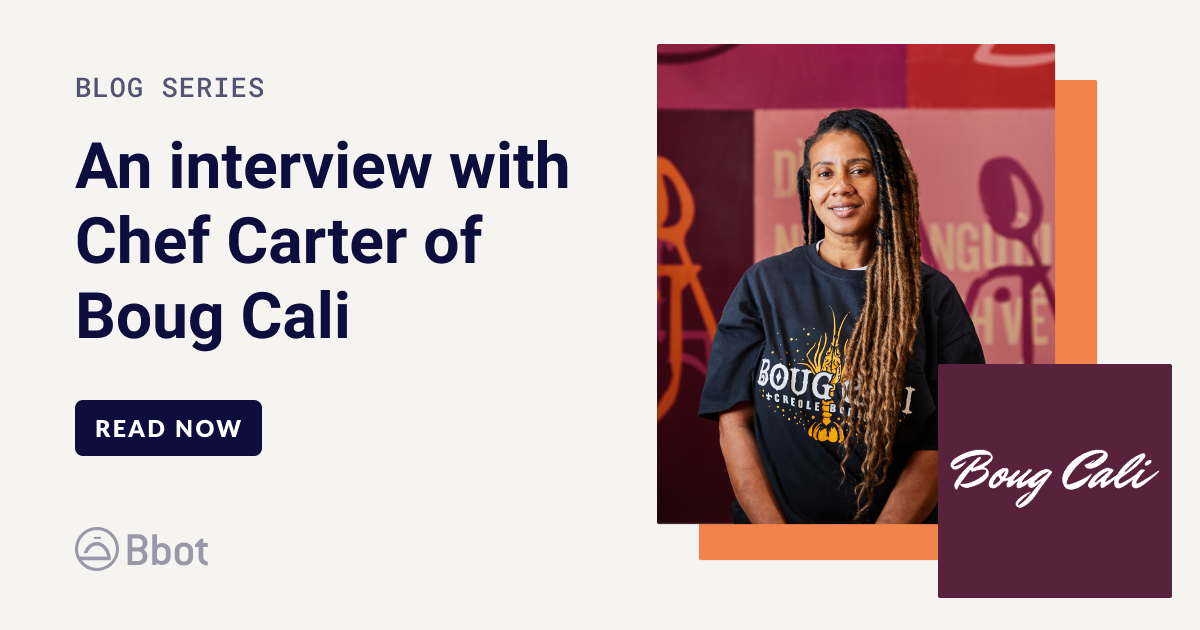 Chef Tiffany Carter understands the meaning of the word ‘hustle.’ She looks me in the eye as we talk, as much as she can over Zoom, and I find myself falling into casual and familiar conversation with her as if we’ve known one another for years. She doesn’t cut around the bush, speaking with a frankness from years of experience and mastery of her craft. And for culinary school graduate Chef Carter, her mastery has found her wandering in the traditional territory in new and exciting ways.

Boug Cali takes the traditional Creole book and throws it out the window. Chef Carter focuses on combining her home-grown California roots with Southern family traditions for an original flair. But this Black Californian combination wasn’t brought to a physical location easily, and Chef Carter credits her success at La Cocina Municipal Market to the similar work ethics surrounding her.

“The thing that I notice the most is that although [the other Chefs] come from different places, we share so many similarities. We’re just women trying to feed our families and run a business, so I don't see many things that we don't have in common. Like I see us all up early busting our butts, and it's inspiring to see people come from different places. And I’m a city girl from San Francisco; the hustle is in my blood.”

Boug Cali is the passion project of Chef Carter, both out of love and necessity. The premise for her specific blend of California-Southern stems from an unexpected source: French food.

“Southern food is different. Well, not different, but a lot of fried food and Creole food is more of a hybrid of French and different cultures - a lot of spices—a lot of different spices in southern cooking. I am not big on southern cooking, but I love it; that’s the food that my family makes. But I just really fell in love with Creole food because I am a classically trained French chef. So my way of making French food, that no one in my community wanted to buy, no one wanted french food. But when you infuse Soul food and French food: that's Creole food.”

The kiosk at La Cocina Municipal Market leans into the combination, from filled Po Boys to Lobster Gumbo. Boug Cali spans the range of Creole options. Chef Carter came into her own with the concept, repeating it in food trucks, opening in the San Francisco Chase Center, and even running her virtual bodega brand.

Her training has paid off, and with the help of La Cocina, she was able to take that hustle she defines herself by and aim it towards her very first brick-and-mortar concept.

Some chefs are born from a passion for tradition, but Chef Carter has always considered herself a student of variety. The diversity in her food tastes lends her a flexible palette, pushing her towards new combinations and Black culture in California. Her adventurous spirit has led her from venture to venture, inherited from her family as she aims to run farther.

“I've always been into food; even before I knew I was really into it, it's something I've always done. I come from a long line of entrepreneurs and business owners, and my family and I have always known that I wanted to start my own business. And so, when I started taking food more seriously, I wanted to learn everything about it, which is why I decided to go to culinary school. I didn't know anything about french food or anything, and it opened me up to a whole new world, and I fell in love. French food is one of my favorites too.”

I asked Chef Carter what has been the most rewarding part of opening her kiosk at La Cocina Municipal Market and what she plans to do next with all this momentum and hard work. The pandemic hasn’t sharpened her edge as she continues to push for growth and acceptance in the community.

“[It’s been] growing my business and seeing it flourish. I had a business prior to going to La Cocina, I had popups, I had a food trailer, but this is my first brick-and-mortar location. And then Chase Center also, but then COVID came and just stopped everything, so I'm just looking to build my brand and for people to see what the whole California creole thing is about. I think that a lot of Black people in California have always cooked like this. You'll find many fusions in California and just to see how people take to it. I'm just looking to grow the brand out.”

Chef Carter learned from the other women in her family how to own her work and business, forming another link in the entrepreneurial tapestry. Although her family is from Louisiana and Alabama, her California roots lend her a new view that straddles between two worlds.

When I asked what makes Boug Cali what it is, she answered with a wide grin, the answer obvious. She pointed at herself with enthusiasm.

“Me! Tiffany Carter! I am a San Francisco, California native, born and raised. I grew up on a lot of Creole food because my family is originally from the south. I grew up eating it without a lot of stories about where it came from or things like that. But just being the California girl that I am, I noticed a lot of the Creole food doesn't have a lot of the vegetables and greens that we are big on in California. So I definitely wanted to infuse those into my menu.”

Her success comes at a time when many businesses have been forced to close. However, she’s faced difficult times in the past, and she intends to overcome the current COVID world with her well-loved hustle. As a co-founder of SF Black Wall Street, she’s used to pushing for what she believes in every day.

Using a Kitchen Incubator for Growth

After graduating from Le Cordon Bleu, Chef Carter found herself fighting for her brand alone. Although she had seen success with her Boug Cali Deli and food trucks in the Bay Ridge neighborhood, she was still fighting to gain traction. The name “Boug Cali” was given to her by the Bayview community, calling her cooking “bougie,” which lovingly stuck.

But if this was going to get off the ground, Chef Carter needed to find a support system that could help her establish her footing. That was where La Cocina stepped in.

La Cocina is a non-profit kitchen incubator that assists low-income women, people of color, and immigrants to formalize their food businesses. The La Cocina Municipal Marketplace stands as an innovative model of conscious, community-led development, offering economic opportunity for women entrepreneurs, jobs for Tenderloin residents, and delicious and affordable food for community members and those looking to eat with purpose.

“I knew about La Cocina for a while, even before I went to culinary school. But I went out to do a lot of the stuff alone, running my own business. But then I was like, Woah, this is really hard, I need some support. So I met Caleb, the Executive Director, and he was like, if you ever need to, call; and then I called. The rest is history. La Cocina has been a blessing over my business. The thing I like the most is being amongst so many other women entrepreneurs. We are all just hustling every day to grow our business and take care of our families. A lot of us are mothers, and we get to talk to each other and ask each other questions, like what's working for you, what's not working for you, and that type of environment has been very beneficial for my business.”

Chef Carter’s busy schedule and success speak for themselves. She’s an entrepreneur with places to go, and it’s easy to see she’s not backing down. Her shoulders are set when she talks about her business, and she exudes confidence that could be classified as CEO-energy.

Of course, I had to ask how to get some of the magic she casts within her own life. How does someone get as far as Chef Carter when they don’t know where to start? Her advice is simple and extremely Tiffany Carter: don’t look. Jump.

“Just start. So many entrepreneurs get caught up in planning and are planning for a long time. I say just get out there, hustle, and talk to people. I'm a bit introverted and need to drag myself out there sometimes. But I know I wouldn't be where I am if I didn't put myself out there and network. Just hustle and don't stop. You definitely need a passion because it's not easy. It's very hard, but it can be so rewarding.”

You can find more about Boug Cali here at their website or by visiting their physical location at the La Cocina Municipal Marketplace. You can also follow the cooking exploits of Chef Tiffany Carter on Instagram or Twitter or order the La Cocina cookbook if you can’t dine at the San Francisco location. 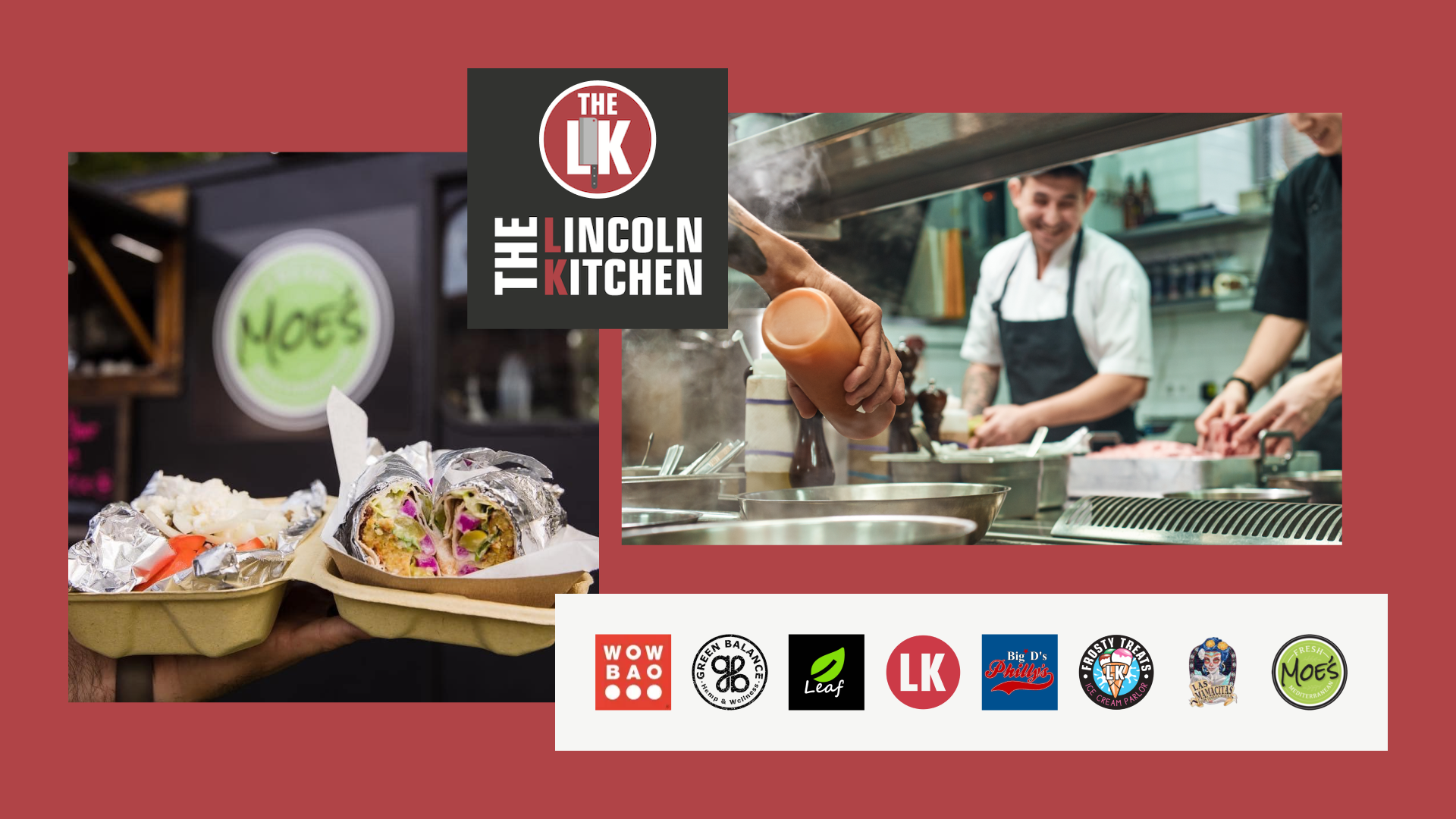 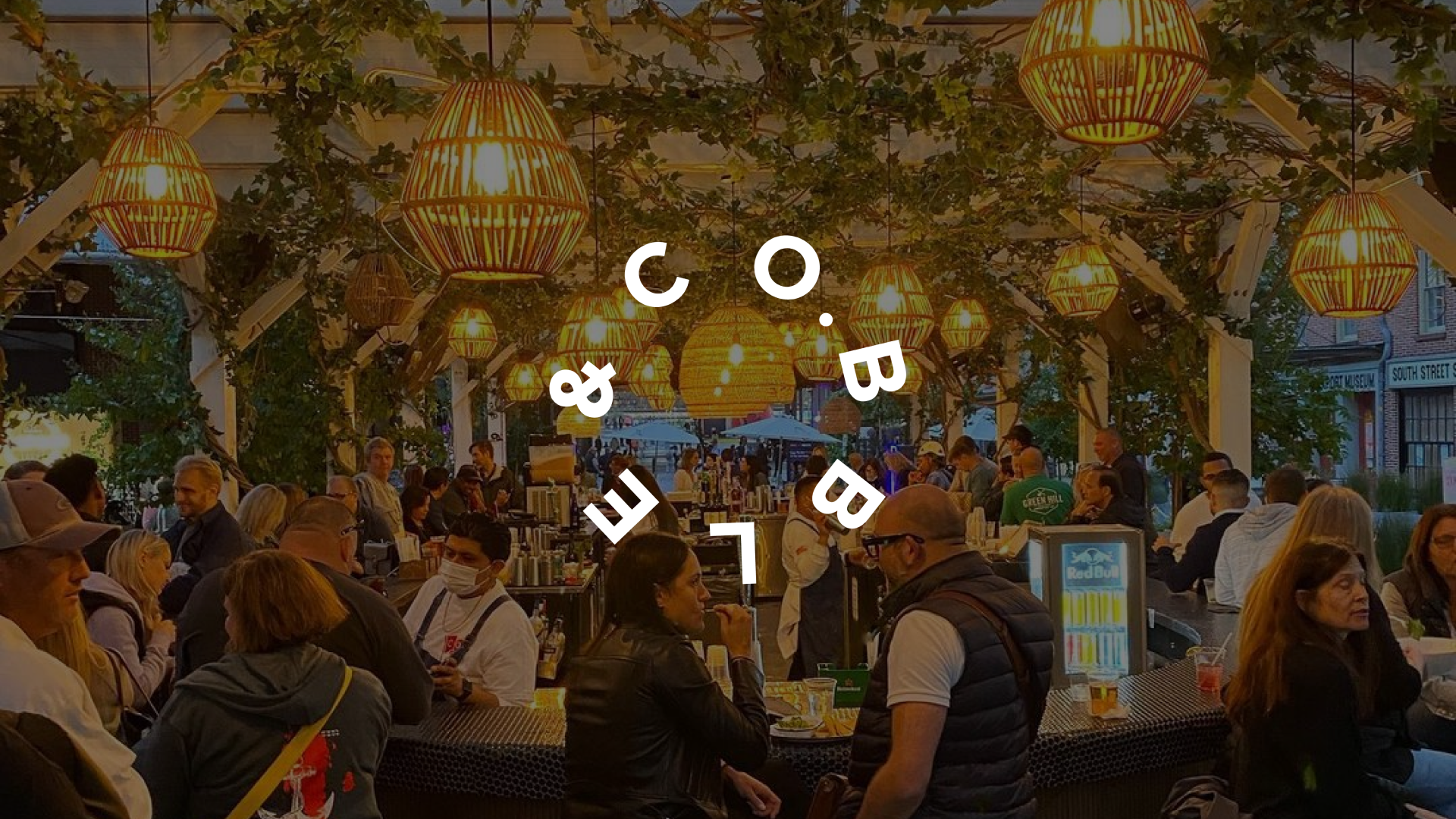 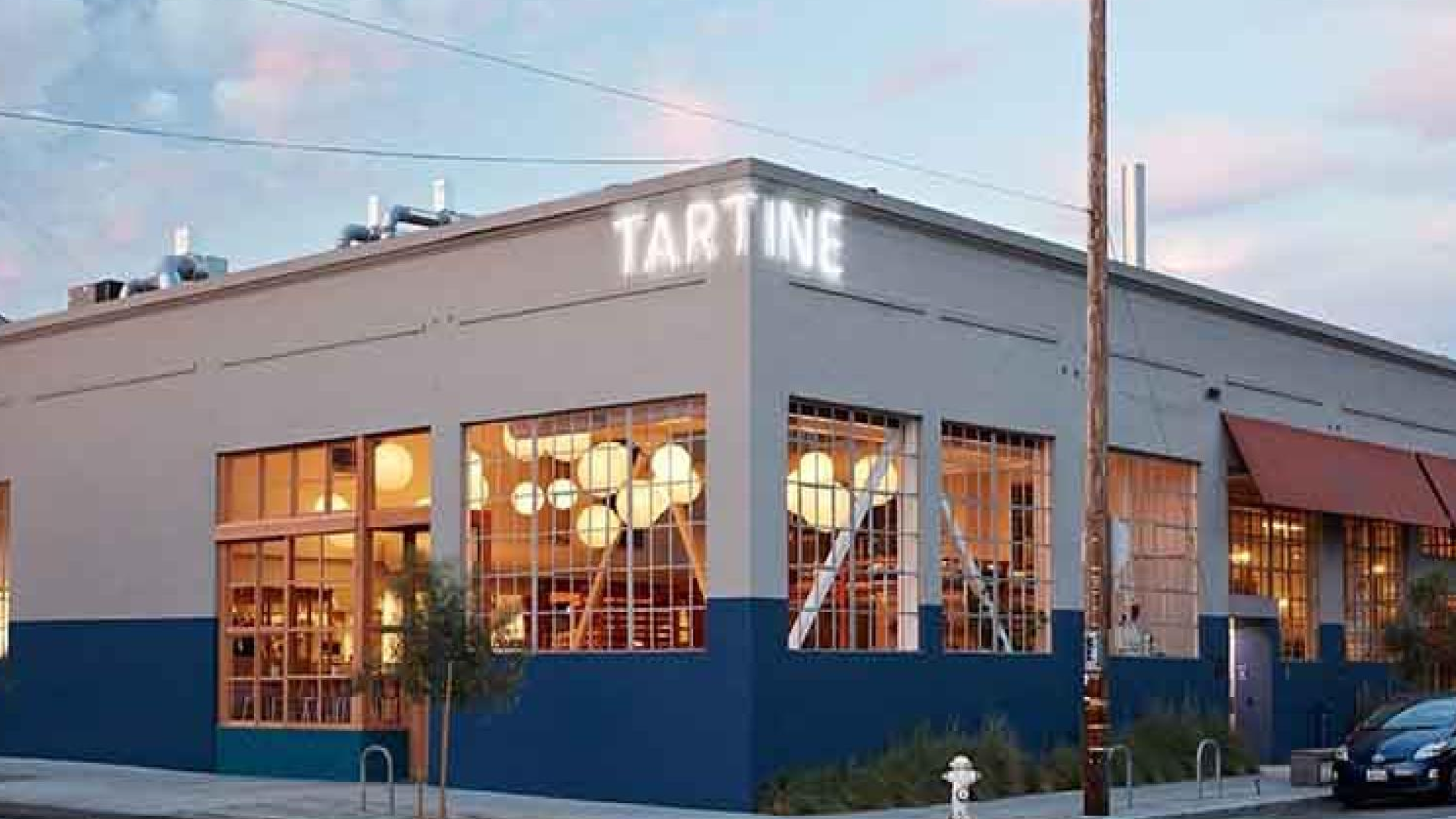